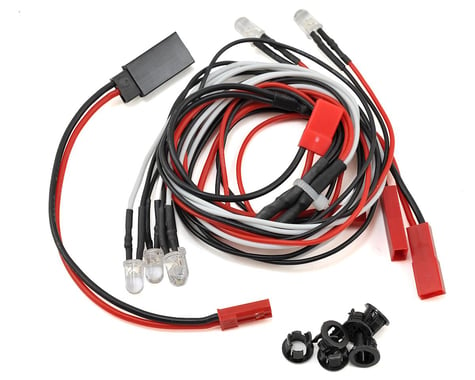 The Yeah Racing Ultra Bright LED Light Kit is a great light kit for any application. These lights feature four white 5mm LEDs, and two red 5mm LEDs, all wired into a single female JST connector. The lights run at a maximum of 6.0V, so they can be powered directly from your receiver, or from a 4 or 5 cell nickel battery.

Package includes light string and two adapters. One adapter features a JR style plug that plugs into the receiver, a male JST that plugs into the light string, and a female JST plug that can be plugged directly into a separate battery. The other adapter features a female JR into a male JST so you can bypass the receiver and power the lights directly from a battery pack. Plus, the package includes