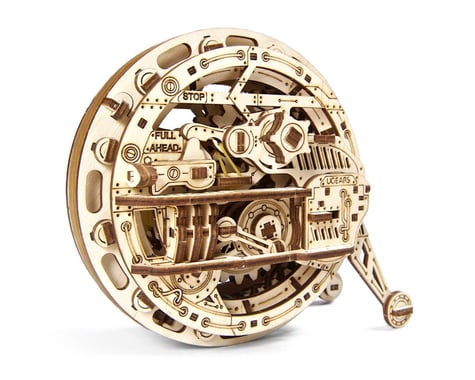 In Stock Online!
Usually ships in 24 hours
Add To Cart
Save In List
Write the first review!
Check Store Availability
Please be aware that pricing and product availability in-store may vary from what’s available online because each store is independently owned and operated.

This is a UGears Monowheel Wooden 3D Model Kit, a fun and smart transport device invented in the beginning of the 20th century. This invention was a single wheel accommodating one passenger-driver that sits within this curious device. This design is so unique that UGears couldn’t help but design one for their collection. Extended research by UGears revealed more about single-wheel mechanisms and found ones that had no operator at all, developed as war machines and all covered in armor.  The real inspiration was a similar approach to the transmission employed in all the prototypes starting in the 1860s: a moving outer element with a stationary mechanism inside.

UGears strove for creation and curiosity and took the best of those two prototypes and proudly presented the all-wooden mechanical Monowheel! No armor shell included – this Monowheel is built in skeleton steampunk style, which means you can see and enjoy the beauty of moving gears in true UGears style. Despite its airy delicate appearance, this model is quite sturdy – take it outside and give it a good roll around on the pavement and other hard and semi-hard surfaces.

The parts of the mechanism imitate a real steam engine. The lack of an outer shell grants easy access to rubber bands should you need to replace them. Two working modes guarantee even more fun. Mode one with the feet locked will give you uninterrupted rolling straight ahead for about 1.5 – 2 meters (5.0-6.6 ft) until the rubber-band motor’s resource is completely released. After that the model gracefully turns around and stops. The second mode with the feet in the unlocked position your Monowheel will roll ahead while the rubber-band motor is working. After that it turns around, its feet hide inside and the model keeps rolling until it runs into an obstacle. In this mode, the model can cover up to 5 meters!

As to the technical characteristics: the UGears Monowheel kit comes with 300 parts, including 19 spare parts. The assembled model measures at 185х95х160mm (7.3x3.7x6.3 inches) and like all UGears family models, it’s made of sustainably sourced high grade wood and has everything you will need for assembly.  The quality of the parts is top-notch: a laser method is used for cutting items from a plywood board that provides precise hairline cuts. The details have to be pulled out of the boards and assembled to create a complete model. Like all other UGears models, the Monowheel comes with step-by-step, full-color, truly easy to follow instructions in 11 languages (English, German, Ukrainian, French, Polish, Spanish, Russian, Japanese, Italian, Chinese and Korean) and requires neither glue nor special tools to be fully assembled into functional Monowheel.