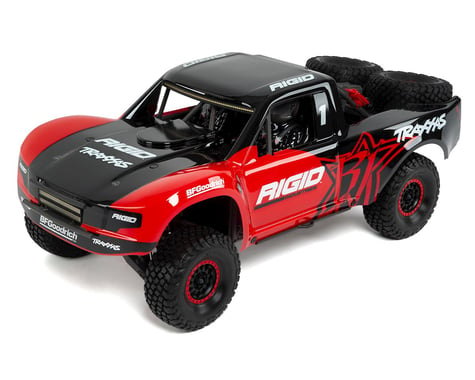 Out Of Stock Online

Check Store Availability
Please be aware that pricing and product availability in-store may vary from what’s available online because each store is independently owned and operated.
Note: Manufacturer does not allow coupons
This item is eligible for Super Saver Shipping Learn More

This is the Traxxas Unlimited Desert Racer "Rigid Industries" Style UDR 6S RTR 4WD Electric Race Truck, along with TQi 2.4GHz Radio & LED Lights is Race Truck is a true to scale 4-wheel drive desert race truck. The 4-link solid rear axle design provides huge suspension travel with authentic driving dynamics. From the cantilever sway bars to the 8 GTR shocks, Traxxas has accurately reproduced a true unlimited desert race chassis in both form and function. Attention to detail captures the look and feel of Trophy Trucks and Unlimited Trick Trucks as they charge hard across the desert at full speed.

The performance of this versatile race truck is now complemented by a high-intensity light from the rugged waterproof LED lighting system. A high-voltage amplifier powers 204 individual LEDs for brilliant light while tightly regulating the voltage to eliminate flickering and dimming. The rear light bar features class lights and smart brake lights that work when brakes are applied in either direction.

Pete DeVries
Traxxas Unlimited Desert Racer UDR 6S RTR 4WD Race Truck (Rigid Industries)
While I dont typically buy RTR RC rigs, every once in a while one comes out that I just want to add to the collection, and when the UDR was released I knew I would someday get one. I also despise spending money on anything Traxxas, but every once in a while they come out with a car or truck that is fun, and as long as you are willing to replace broken and worn parts very frequently, and you dont mind spending a good 5 or 6 hours doing a complete tear down and rebuild for manor cleaning and maintenence, then this UDR fits the bill.

Its by far the most fun when running it in big open packed dirt or gravel parking lots, hard packed baseball infields although they would be far better if they were twice the size, or any surface that is loose but hard enough that you dont constantly traction rroll.all 10 of my other RC vehicles are set up to run with my Futaba 7px, and I bought another reciever along with this truck, however after I realized how difficult it is to control on hard packed loose surfaces where this truck is by far the most fun, when setting the AVC control between 1/3 and 1/2 actually makes it far better when it comes to driving at high speeds and doing giant drifting powerslides. Normally I never use those features but this truck needs it to go fast... I think Ill stick with the cheap RTR remote for now... There is a 2 acre gravel lot by my work that is perfect however because its gravel every part of the underside, rear axle, trailing arms, rear shocks and the rear area of the plastic tube chassis gets beat up super fast and after just 2 packs totalling around 25 to 30 minutes the truck looked like it had been used hard for months. After 7 or 8 packs I replaced the rear axle, 3rd member, lower trailing arms and the body needs to be replaced, and Ive had to replace the rear outer axle bearings twice during that time. I ran one charge at a bmx track, but those big jumps is not the right place for this truck. 15 minutes and the body was destroyed far worse, the front bumper/lower skid plate failed as well as both of the grill mounted LED light bars were smashed and the right front lower suspension arm was in 2 pieces. Im not blaming Traxxas for this as I had a couple bad landings from 6 feet up, but if thats what you like to do with your trucks, dont buy this one. It was a bit muddy and I had to replace all 4 front hub bearings as well as the rear axle bearings again because I had to wait a day and half before I could completely tear the truck down again and clean everything.

Overall, I think this truck is only a good rig for certain people. Its definitely not something you want to bash or send off huge jumps as its too heavy to correct the agle while in the air, and its not very fun to run on pavement either because it traction rolls too easy. I would also never recommend it to someone who isnt willing to spend a lot of time on maintenance. After 15 minutes at a slightly wet and muddy bmx track, it was at least 5 hours to tear down enough to thoroughly clean it and replace broken parts. While the suspension and overall design is cool because of the scale factor, it makes accessing things like the front diff and other oarts that need regular maintenance a major job. I want to grab the Losi Super BajaRey to compare the two, but if Traxxas came out with a newer version there are some things they could do that would make this truck a lot better. One of the things that failed before i even finished the first pack was the body had torn through 2 of the 4 scews that attatch it at either end of the tube slider things between the front and rear wheels. My body is super thin down there and after only a couple medium speed tumbles all 4 screws were torn through. Lexan bodies will always eventually need to be replaced, especially when the truck is as heavy as this one, but when my replacements show up they will without a doubt be getting a heavy dose of drywall repair and shoe goo in certain areas. Proline just released a 60's Ford body that ive ordered along with another clear stock version.

The speed amd power running on 6s put of the box is plenty good enough as unlike most of my RC rigs, I see no need to make this one any faster as at top speed now its already a handfull to keep on its wheels. I would prefer if Traxxas threw the Xmaxx 8s esc/motor combo in it simply to help it run cooler because the truck is really heavy, the complicated and heavy drivetrain sucks a lot of power to spin and the motor temps can get higher than I like after a full charge. I have never tried running it on 4s power, but I can tell that unless you were on a small track or area it would be underpowered for its size and weight. It also would have been a lot better if they used a more traditional 1/8 drivetrain rather than all the extra gears and stuff in the transmission and rear end. The plastic spring preload adjusters are junk and need to be aluminum along with orings so they dont self adjust during a run, and the entire steering mechanism has a ton of flex and slop being that its all soft plastic to prevent parts from snapping, but like every other RC I own, after the first day of running it I upgraded the steering servo to a Protek 170TBL, and the stock plastic servo horn failed on the next run. Basically this is like every other Traxxas rig Ive had. Certain parts and features are cool, but because most of the plastic is so soft and all of the pivot balls have a lot of play there is a ton of slop with every moving part. One good thing is the replacement parts are cheap, but after seeing how quickly things were wearing out, there is a long list of parts that Ive got on order to just have as I know they will get used in time.
1 customer found this review helpful.
Enrico Menke
Verified Owner
Traxxas Unlimited Desert Racer UDR 6S RTR 4WD Race Truck (Rigid Industries)
recently purchased the Traxxas UDR. after reading as many reviews pertaining to this kit as I could find, I decided to upgrade all the weak areas on the kit that I felt need some help. although Traxxas did an excellent job designing the truck. like all of the rc trucks currently out there, there is always room for improvement. no matter which manufacture you purchase from.

the UDR offer a great start for a real performer! it size and weight lends itself well for modification. a host of manufactures of upgrade parts for this truck allows the owner to build a tailor made truck to meet anyone's needs.
power upgrades as well as a ton of aluminum components has turn my truck into my current favorite.

I love the Traxxas TSM module! first truck I own that incorporate's this technologies. makes driving the truck at high speed not only easy, but thrilling!! with a little practice and adjustments to the TSM gains I've been able to throw the truck into any high speed turns with confidence. its a real blast!!

We don't have a ton of time on the truck just yet, but so far so good. Totally recommend this pro scale truck to anyone who loves off road racing and loves the hobby of RC. The suspension action and handling is so realistic.
View all reviews (3)
Related Products
Customers also purchased...