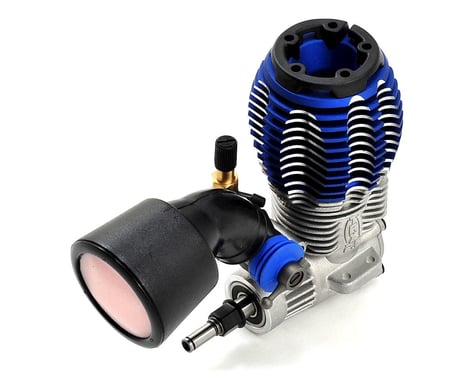 Out Of Stock Online
You may back order this item and it will ship when it arrives.
FREE Shipping Eligible! Learn More

Check Store Availability
Please be aware that pricing and product availability in-store may vary from what’s available online because each store is independently owned and operated.
Note: Manufacturer does not allow coupons
This is the TRX 2.5R .15 Rear Exhaust IPS Shaft, Standard Plug, Slide Carb Engine, Non Pull Start engine from Traxxas. The Power of TRX 2.5 - Elevating Ready-To-Run to Ready-To-Race®!

The TRX 2.5 Racing Engine is loaded with advanced engine design features such as the free-flowing rear exhaust, the unique composite slide carburetor, and innovative porting that previously would only be found on the most exotic, modified racing engines. Traxxas brings it all to you and makes it start with the push of a button.

The TRX 2.5 Racing Engine is completely designed and manufactured by Traxxas. Our engineering team spent over 2 years designing not only the engine, but also brand new, state-of-the-art manufacturing facilities to allow us to produce the engine to the absolute highest quality standards. Multiple manufacturing lines allow us to produce a large volume of engines and bring you much higher levels of quality and technology at down-to-earth prices. Since the TRX 2.5 is actually made by Traxxas rather than being purchased off-the-shelf from an outside supplier and re-branded, the TRX 2.5 is backed by Traxxas know how, and Traxxas' unmatched customer support.

With 60% more power than the Pro .15 engine, the TRX 2.5 Racing Engine installed in a stock, out-of-the-box Nitro 4-Tec took it from 50mph top speed to speeds in excess of 60mph, with nothing more than an engine change. Nitro Rustler also gained 10mph to reach 47mph out of the box. By adding a 22-tooth clutch bell 50+mph speeds were attained. The new T-Maxx? 40+mph and wheelies on demand! These examples are a strong testament to the power of the TRX 2.5 Racing Engine.

The great thing about TRX 2.5 power is that it feels like it is "on-pipe" across almost the entire RPM scale. There's lots of power down low for tire-spinning, wheelie popping torque, and there's big power up high for screaming, top-speed performance. The TRX 2.5 Racing Engine was built to provide big horsepower all the time, with little focus on an exaggerated peak horsepower number that occurs at an impractically high RPM. It's made for real world drivers like you (and us!) that just want to rip-it-up on the track, in a field, or anyplace you can find.

The many things that were put into the engine to maximize power output and efficiency also have the benefit of making the TRX 2.5 Racing Engine easier to tune. It's tolerant to to a very wide range of needle settings and variations in temperature, altitude, etc. The engine is tightly sealed with o-rings throughout to eliminate air leaks that can cause inconsistent running performance. The engine responds precisely to changes in the needle settings for easy, predictable tuning.

This product was added to our catalog on January 25, 2006