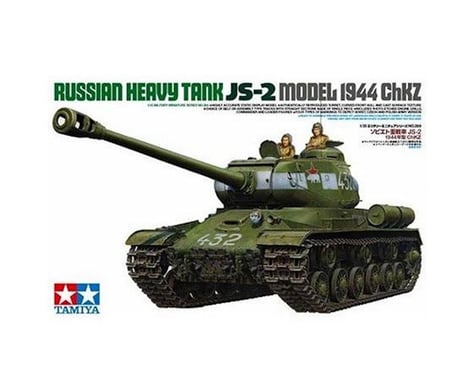 In Store Only
Write the first review
This item is only available for purchase exclusively from our retail stores. Click here to find a store near you. You may want to search our site for a similar item.
Check Store Availability
Please be aware that pricing and product availability in-store may vary from what’s available online because each store is independently owned and operated.
Tamiya Russian Heavy JS-2 Tank 1/35 Model Kit. The Russian Heavy Tank JS-2 was built to overthrow the German Tiger I. Put into production in the latter half of WWII in December 1943, it had a long powerful 122mm gun and superior mobility. From August 1944 the upper part of the hatch was removed from the hull which greatly improved its survivability. The JS-2 was produced in the Chelyabinsk Kirov factory (ChKZ), and a characteristic of the tank is its one piece cast rounded front. The JS-2 showed great strength in the break through of defensive positions but also in anti-tank battles. The Russian tank JS-2 played a major part which contributed to the victory of the end of the Great War.