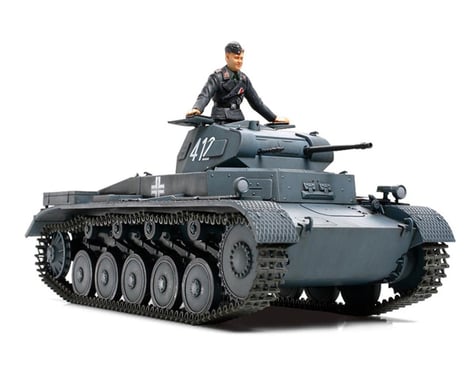 The Tamiya Panzerkampfwagen II Ausf.A/B/C 1/35 Model Tank Kit is a 1/35 scale replica of the German Panzerkampfwagen II tank. Supplemental armor plate parts can be installed in the same manner as the actual tank. Various hatches throughout the tank are separately-molded, and armor panels are included to accurately recreate the different variants. Assembly-type tracks feature single-piece sections for effortless construction. Comes with a commander figure and three kinds of markings for the French campaign. Display the Panzrkampfwagen II with other vehicles such as the French Battle Tank B1 bis, French Armored Carrier UE, German 3 Ton 4x2 Cargo Truck, and the German Infantry Set (French Campaign) to create dioramas of the early WWII battlefield.

After WWI, Germany pushed forward the development of battle tanks under a blanket of secrecy. The Panzerkampfwagen II used the Panzerkampfwagen I"s hull and came armed with a 2cm main gun. Mass production of the Ausf.A began in 1937 and various improvements including a new suspension led to the Ausf.C. Until the end of production in April 1940, 1088 Panzer II tanks were manufactured. They led the surprise invasion on Poland and were the main tanks used in the attack on France. Later, they were successfully used in reconnaissance missions until the end of the war.

Note: Photo of completed model is for illustrative purposes only. This is a model kit that requires assembly. Hobby tools, adhesive and paint will be needed to complete the model.