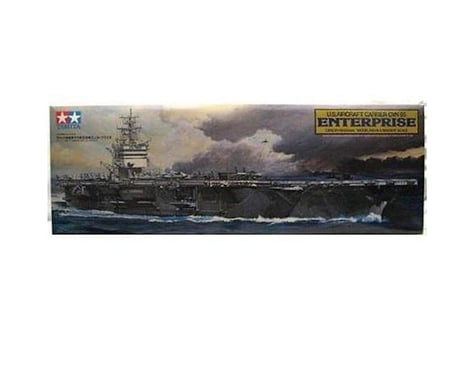 Save In List
Check Store Availability
Please be aware that pricing and product availability in-store may vary from what’s available online because each store is independently owned and operated.
This is the Tamiya CVN-65 USS Enterprise 1/350 Aircraft Carrier Model Kit. The United States Navy Aircraft Carrier CVN-65 Enterprise, also known as the "Big E", is the worlds largest ship and the first nuclear powered aircraft carrier. Webster defines the word Enterprise as meaning "Undertaking, Project, A business organization, Initiative, etc.", and the CVN-65 fits all of these definitions perfectly.

The carrier Enterprise is the 8th U.S. Naval vessel to carry the name, and the first one was launched in 1755 as a one masted sailing ship that served during the American Revolution and its displacement was only about 1/1000 of the current namesake. Following the end of the second conflict, the U.S. Navy had on hand 99 aircraft carriers, with another 39 under construction, but with the completion of hostilities, construction was halted and many of the others were mothballed. In 1947, only 20 carriers were in active service, including the Midway. With the advent of jet aircraft and heavier gross weights of the new planes, a large 60,000 ton class of carrier was discussed to cover these needs. Construction was begun on CVB-58 in 1949, a 65,000 ton class carrier, but was halted after only five days, because of a change in political thinking, wherein emphasis was placed upon tactical long range bombers instead.

With lessons learned during the Korean conflict, 4 new carriers, of the Forrestal class, at 60,000 tons were constructed during the 1955-59 time period, and the improved Constellation was completed in 1961. During this period, the U.S. Navy had progressed in the development and testing of a trial nuclear powerplant, suitable for surface ships, and was first used in the Cruiser Long Beach, making it the first nuclear powered surface vessel. Funding was received by the Navy for the construction of a 75,000 ton displacement nuclear powered carrier and the Newport News Shipbuilding and Dry Dock firm began construction on 4 February 1958. The CVN-65 was launched as the Enterprise on 24 September 1960 as the largest ship afloat. Its waterline is 317 meters long and has a beam of 40.5m, but even with these awesome dimensions it has the same draught as that of the Kitty Hawk class carriers. The Enterprise is powered by eight pressurized water cooled A2W nuclear reactors and 4 geared steam turbines by Westinghouse, which produces 280,000 horsepower. With this power the Enterprise can travel 140,000 n.m. at 36 knots or 400,000 n.m. at 20 knots. Cost of construction was 450 million dollars.

In January 1979 the Enterprise completed her 3rd refueling and overhaul, with many modifications updating the state of the art in electronics, communications and weapons. The CVN-65 carries 94 aircraft which include F-14A Tomcat, A-7E Corsair II, A-6E Intruder, S-3A Viking, EA-6B Prowler, E-2C Hawk Eye and SH-3H Sea King helicopters.