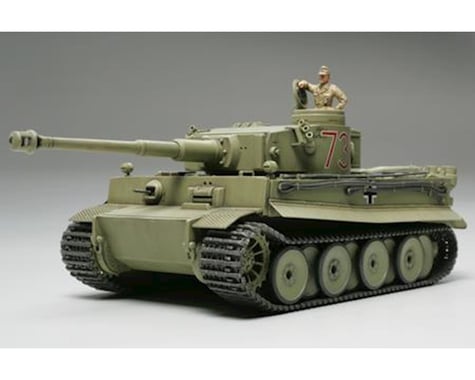 Check Store Availability
Please be aware that pricing and product availability in-store may vary from what’s available online because each store is independently owned and operated.
This is a Tamiya 1/48 Scale German Tiger I Initial Tank Africa Corps Model Kit. German tanks and AFVs continue to be some of the most popular items in our 1/48 Military Miniature Series, and weve gotten lots of requests for Tiger I variants. In addition to spotlighting
the North African theater for a fresh change of focus, this Tiger I Initial production assembly kit adds one more great model to our ever-expanding 1/48 MM lineup. Display with the 1/48 Kubelwagen (Africa Corps) for a mini diorama of Rommels desert fighters. The German heavy tank, Tiger I, was one of the most famous tanks in WWII. The Tiger had the 88mm KwK 36 L/56 as main gun, 100m thick armor at the front and 80mm on the both sides. With 1,354 models produced by August 1944, the Tiger went through many variations. The characteristics of early production Tigers included gun port on the side of turret and front fender composed of a skidproof-board. In addition, there were Feifel air pre-cleaners for desert use, the storage box behind the turret and fenders on both hull sides. The distinctive feature of Tiger I tanks serving in sPzAbt 501 (501 heavy tank battalion) was the exhaust cover with the heat dissipation slit.