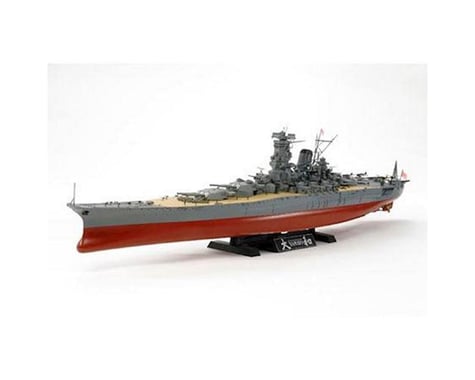 Out Of Stock Online
You may back order this item and it will ship when it arrives.
FREE Shipping Eligible! Learn More
Back Order
Save In List
Read Reviews Write a Review

This is a Tamiya 1/350 Japanese Battleship Yamato Model. With many revolutionary features incorporated into her design, the Yamato was completed in December 1941, and met her final fate at the hands of American Navy carrier aircraft in the South China Sea while on a one way mission to Okinawa. This model features minor modifications to Tamiya"s previous Yamato replicas Items 78002 and 78014, and has her looking as she did just prior to departing for her final mission, in an exquisite 1/350 scale assembly kit display model. The Yamato"s massive imposing silhouette is accurately reproduced, and both the main gun turrets and secondary armament turrets can be rotated even after assembly.

Donald Knight
Verified Owner
Tamiya 1/350 Japanese Battleship Yamato
Nice ship.Was a little hard to make the deck look like teak but after a few combinations I think I got it.Added some different colors after looking at some pictures of the Yamato.The only problem I had was the delivery time.I paid for 3 day delivery but it took a little over a week.I thought the company should have reimbursed my account.Other than that had a great time building my new edition to my fleet.
View all reviews (1)
Related Products
Customers also purchased...