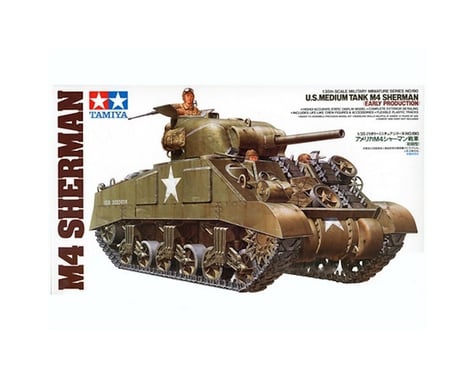 Ths is a Tamiya 1/35 U.S. Medium Tank M4 Sherman Model Kit. The M4 Sherman medium tank series was not only the main U.S. Army armored vehicle during WWII, it was the motive power that brought victory for the allies during the conflict. With more than 55,000 produced in all variations, it was the most widely produced tank during the war. The five major variants of the M4 to the M4A4 were designated by the hull and engine used. The M4 used an angular shaped welded hull, and the Continental R975-C1 radial aircraft engine. Although powerful and proven, its high center propeller shaft gave the hull a tall profile. Suspension was a rugged and simple design, known as VVSS (Vertical Volute Spring Suspension), with three units (or bogies) on each side, and each with two road wheels. The transmission was 5-speed forward, plus reverse. Early production M4's had a 3-piece front transmission cover, and a cast one-piece steel turret mounting a 75mm main gun. For added protection, applique armor plates were added to the turret, hull sides and just in front of the forward hull hatches. Production of the M4 began in July 1942, five months later than the cast hulled M4A1. It was first deployed during the Italian campaign in May 1943. Although outgunned by the German Panzers, the M4's superb reliability, mobility and superior numbers, compensated for the smaller weapon. M4 Sherman tanks saw action on every front, from its introduction in Italy, to the end of the conflict.