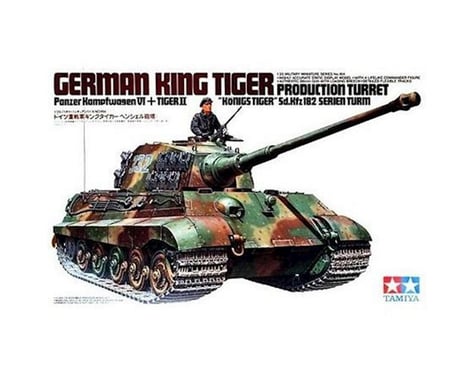 This is a Tamiya 1/35 King Tiger Tank Model Kit. In order to counter the increasing threat of Russian tanks during the latter part of the Second World War, Germany began development of a new heavy tank in February 1943. Officially designated the Panzerkampfwagen VI-B Tiger II, but better known as the King Tiger, it featured thick armor and a powerful main gun. Henschel and Porsche, who had prior experiences in the manufacturing of heavy tanks, came up with rival prototypes incorporating different turret configurations. After trials, the Henschel design was adopted for production. The King Tiger carried the Type 43 L71, 88mm high velocity main gun which was capable of penetrating 170mm thick armor plate at a distance of 1000 meters. Auxiliary armament included two 7.92mm machine guns mounted on the front hull section and on the turret. The extremely thick armor on the turret front measured 185mm and 88mm on the side panels. Power for this massive tank was supplied by a Maybach HL230 P30 V-12 cylinder, liquid cooled engine, producing 700 horsepower. The King Tiger went into mass production at the Henschel factory beginning August 1944, following the delivery of the last Tiger I tanks. Although the tank possessed advanced technology and sophistication, only 430 units incorporating the Henschel turret came off the factory line, and less than 500 total were ever available for combat.

This product was added to our catalog on April 8, 2020