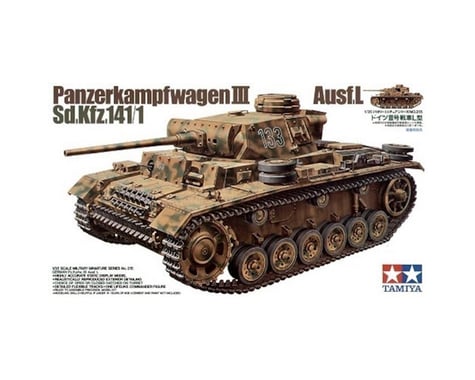 Check Store Availability
Please be aware that pricing and product availability in-store may vary from what’s available online because each store is independently owned and operated.
This is a Tamiya 1/35 German Pz. Kpfw III Ausf. Tank Model Kit. The German Pz.Kpfw. III, along with the IV, played an active part in the early stages of WWII as their mainstrength tanks. However when they encountered the Russian KV and T-34 tanks on the Eastern Front, the weakness of the Pz.Kpfw.III was revealed and the balance of power tipped in favor of the Russians. Thus the pz.Kpfw. III underwent constant improvement throughout its career to maintain an advantage. The Pz.Kpfw. III had a number of types, from the A to N. Among them, the Ausf. L was produced from July 1942. As it was manufactured at the existing tank factory, the basic performance and structure were the same as previous versions with a few modifications. Armament consisted of an improved, long barreled Kwk50 L/60 tank gun, which was effective against the Russian T34 tanks up to a range of 600m, plus two 7.92mm MG34 machine guns. The armor of the front superstructure was increased to 57mm in thickness, and a 20mm thick spaced armor was added to the gun mantlet as well, which increased the tank's weight by 200kg. To cope with the added weight, the suspension system was also strengthened. The powerplant was a Maybach HL120TRM, V-12, water cooled engine producing 300 horsepower. In total 635 Ausf. L's were produced by the end of 1942, and many of them saw active service on the Eastern Front and the North African Front. Although its roll was shortly replaced by the Tiger I and the Panther, the durable chassis of the Pz.Kpfw. III was used for self-propelled guns till the end of the war.