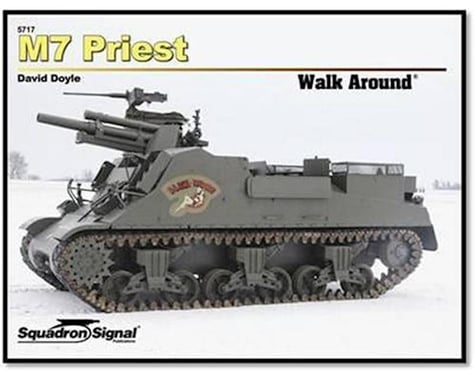 Unavailable Online
Write the first review!
Check Store Availability
Please be aware that pricing and product availability in-store may vary from what’s available online because each store is independently owned and operated.
This item is not available for purchase online. You may want to search our site for a similar item.

Doyle. The US M7 self-propelled 105mm Howitzer, known as the Priest, was originally developed on the basis of an M3 medium tank chassis. Nicknamed the Priest because of its pulpit-like anti-aircraft ring, the vehicle was intended to provide armored units with organic, highly mobile artillery support. Production began in April 1942 and it first went into combat with British at the Second Battle of El-Alamein in the autumn of that year, with U.S. forces first taking the American-built vehicle into engagements in Tunisia somewhat later. Already proven successful in combat, the vehicle was further refined on the basis of field experience. M4 Sherman tank parts were incorporated into later Priests, in place of the earlier M3 tank components, and late models – those built during 1944 and after – also featured fold-down armor along the sides and rear of the fighting compartment. To cope with the mountainous terrain of Korea, the Howitzer and machine gun mounts of the Priest were raised when the vehicle was employed during the war there in the 1950s. Packed with more than 230 photographs, plus color profiles and detailed line drawings; 80 pages.