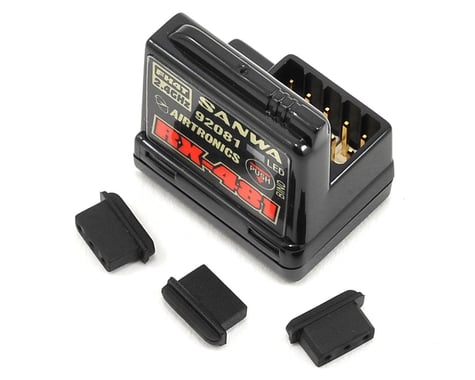 In Stock Online
Usually ships in 24 hours
FREE Shipping Eligible! Learn More
Add to Cart
Save In List
Check Store Availability
Please be aware that pricing and product availability in-store may vary from what’s available online because each store is independently owned and operated.
This is the Sanwa RX-481 2.4Ghz FHSS-4 4-Channel Surface Receiver, with a built-in Internal Antenna. The RX-481 Super Response receiver features a built-in antenna! This means no more antennas sticking out of the body, as well as no more worry about damaging the antenna during use. Just mount the RX-481 Super Response receiver in the upright position in your model and enjoy the same solid reception as you've come to expect from other Sanwa surface receivers.

The RX-481 Super Response receiver is compatible with Airtronics and Sanwa 2.4GHz FH3 and FH4T transmitters, such as the M12S, M12, MT-4S, MT-4, MX-3X, M11X, EXZES-Z and Gemini X. It features an extremely low latency time and high frame rate, which makes you feel more connected to your model than ever, and when combined with Airtronics or Sanwa Super Response SRG digital servos (available separately), the RX-481 Super Response receiver will deliver reaction speeds like never before!