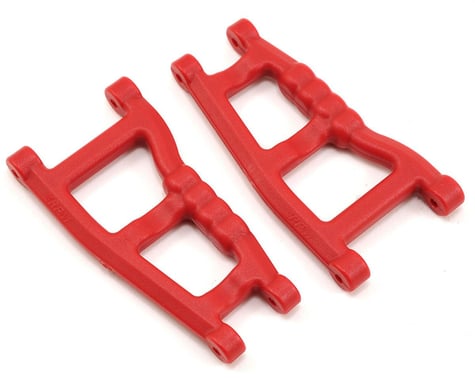 In Stock Online
Usually ships in 24 hours
$1.99 flat rate shipping! Learn More
Add to Cart
Save In List
Check Store Availability
Please be aware that pricing and product availability in-store may vary from what’s available online because each store is independently owned and operated.
This is an optional red RPM rear A-arm set for the Traxxas Slash. These arms have been designed specifically for the Slash – they are not multi-platform A-arms like the stock arms!

RPM's first design challenge was to beef up thier version of the Slash rear A-arms to handle serious abuse. The material around the inner and outer hinge pins has been increased by a whopping 64%! They then eliminated all of the unnecessary holes and shock mounts that would be needed on other vehicles but not on the Slash, which significantly reduced the weight of the A-arms while improving crash durability. Even after all of the increased muscle has been factored in, the A-arms still weigh in over 10% lighter than the original arms! The final design task was to improve the fit and finish and what RPM came up with will eliminate most of the slop in the rear suspension system! The Slash owner can tighten things up to near perfect out back simply by adding in a set of RPM Rear Bearing Carriers (RPM80382). RPM Slash rear A-arms use stock suspension geometry and include stock rear toe angles.

RPM Slash rear A-arms are not only stronger and more durable than stock, they are also more rigid and less flexible too, making them the perfect addition to those race-level Slashes on the track. Additionally, the geometry design leaves no place for dirt and rocks to get caught in the lower A-arm and reduces the chances of rocks and debris getting stuck between the axle and the arm.

RPM Slash rear A-arms are sold in pairs. They are molded in RPM's nearly indestructible blend of nylons and are available in red, green, black or blue. These A-arms are backed by RPM's limited lifetime warranty against breakage as well for confidence-inspiring durability and performance.

NOTE: Stock rear axle carriers have an upper and lower hinge pin hole. RPM Slash Rear A-arms only allow the use of the original, lower hole location to be used. The upper axle carrier hole (which would lower the ride height in the back too much) cannot be used. To lower the rear end of the truck, RPM recommends using the outer shock mount hole positions in the A-arm.