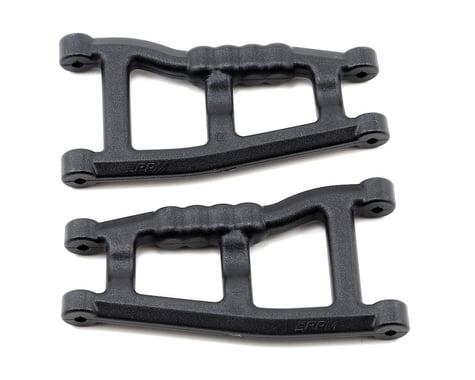 In Stock Online!
Usually ships in 24 hours
Add To Cart
Save In List
Read Reviews
(4) Average Rating:5
Write a Review
Check Store Availability
Please be aware that pricing and product availability in-store may vary from what’s available online because each store is independently owned and operated.
This item is eligible for $1.99 flat rate shipping Learn More

This is a set of two rear RPM  rear A-arms for the Traxxas Slash and are designed specifically for the Slash – they are not multi-platform A-arms like the stock versions.

RPM's first design challenge was to beef up thier version of the Slash rear A-arms to handle serious abuse. The material around the inner and outer hinge pins has been increased by a whopping 64%! They then eliminated all of the unnecessary holes and shock mounts that would be needed on other vehicles but not on the Slash, which significantly reduced the weight of the A-arms while improving crash durability. Even after all of the increased muscle has been factored in, the A-arms still come in at over 10% lighter than the original arms! The final design task was to improve the fit and finish and what we came up with will eliminate most of the slop in the rear suspension system! The Slash owner can tighten things up to near perfect out back simply by adding in a set of our #80382 Rear Bearing Carriers currently available. RPM Slash rear A-arms use stock suspension geometry and include stock rear toe angles.

RPM Slash rear A-arms are not only stronger and more durable than stock, they are also more rigid and less flexible too, making them the perfect addition to those race-level Slashes on the track. Additionally, the new geometry design leaves no place for dirt and rocks to get caught in the lower A-arm and reduces the chances of rocks and debris getting stuck between the axle and the arm.

RPM Slash rear A-arms are sold in pairs. They are molded in RPM's nearly indestructible blend of nylons and are sold in either black our blue. These A-arms are backed by RPM's limited lifetime warranty against breakage as well for confidence-inspiring durability and performance.

Tech Notes: Stock rear axle carriers have an upper and lower hinge pin hole. RPM Slash Rear A-arms only allow the use of the original, lower hole location to be used. The upper axle carrier hole (which would lower the ride height in the back too much) cannot be used. To lower the rear end of the truck, RPM recommends using the outer shock mount hole positions in the A-arm.

SHO
Verified Owner
RPM Traxxas Slash Rear A-Arms (Black) (2)
Ok here is the truth: RPM Rear A-arms are the perfect combination of strength and durability, with just a touch of flexibility to save you when all other parts would have exploded like a parked smart car vs. a speeding 80,000lbs. semi truck. Yes they can break, but in a hammer like way: well used or a completely random fluke. I've never had any issues and they fit better then Mechanics Gloves.

Take it from someone who bashes his over-weight, over-powered slash almost daily.

R. Rugged
P. Performance
M. Masterpiece
2 customers found this review helpful.
john paulson
RPM Traxxas Slash Rear A-Arms (Black) (2)
this is a great set of a arms there very stong and light and u can get them in blue!
2 customers found this review helpful.
WesK
Verified Owner
RPM Traxxas Slash Rear A-Arms (Black) (2)
Stellar rear arms for the Slash. Lighter and stronger than original equipment. RPM makes good stuff for a reasonable price. No complaints.
2 customers found this review helpful.
Henry Simas
RPM Traxxas Slash Rear A-Arms (Black) (2)
I have had theses a-arms on my slash for well over 3 years now and I have never had to replace them even once. they are gouged, scratched, far beyond looking good, abused, gone trough massive barrel, rolls hit curbs, walls, rocks, tree roots, trees, fences, car tires, through the ringer and back, take a licking and keep on trucking, gone beyond what any control arm should go through and survive all at full throttle. my truck is way over powered with a momba max pro esc and 2400kv brushless castle creations motor geared for max speed beyond what is practical use. I have thought of replacing them just because new ones would look better by why? they still work. I replace a lot of stock drive train pieces when those fail but cost less when they need replacing. I can't say enough about rpm products. strong reliable and guaranteed if they ever do fail no questions asked
1 customer found this review helpful.
View all reviews (4)
Related Products
Customers also purchased...