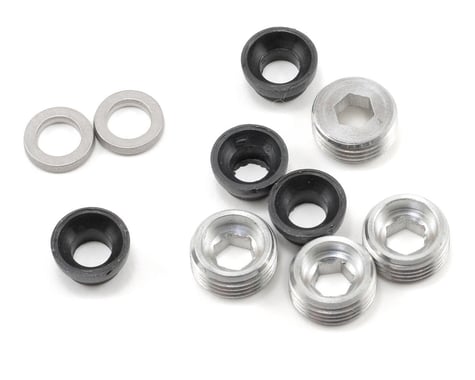 In Stock Online
Usually ships in 24 hours
$1.99 flat rate shipping! Learn More
Add to Cart
Save In List
Read Reviews Write a Review
Check Store Availability
Please be aware that pricing and product availability in-store may vary from what’s available online because each store is independently owned and operated.
This is a set of optional RPM Pillow Ball Set Screws & Bushing Caps, and are intended for use with the Traxxas T-Maxx, and E-Maxx, as well as the Associated Monster GT monster trucks. Until now, the only way to replace damaged or worn out pillow ball setscrews and bushing caps was to purchase new pillow balls as well. This was quite costly and frustrating since rarely do the stock pillow balls wear out. These pillow ball set screws and bushing caps were designed to help reduce costs by nearly half and eliminate the need to buy unnecessary parts! These setscrews and bushing caps are direct replacement parts for stock Traxxas Axle Carriers and RPM Oversized Bearing Carriers.

Associated MGT owners: Stock MGT axle carriers have the same geometry as stock Traxxas T/E-Maxx carriers. The only differences between the two are in the thread size of the setscrews and the spacing between the bearings. This package takes care of those differences and allows Associated MGT owners to run RPM T/E-Maxx Oversized Bearing Carriers (#80031, #80032, #80035, & #80038) on their trucks. The small spacer is used between the two bearings in the axle carrier and the new RPM setscrews replace the stock MGT versions.

This product was added to our catalog on October 13, 2009

Jordan
Verified Owner
RPM Pillow Ball Set Screws & Bushing Caps
By carefully reading the instructions All set screws were perfectly installed. RPM wants you to make the initial threads (Tapp) into the carriers so the screws don ever back out and there is no need to tighten. Use the right size driver (1/4" screw driver handle w/hex bit) set the carrier flat on hard surface. Place the set screw over the opening, loosen or back the set screw out untill it slips onto the first thread thread groove then begin to tighten. The bushing caps used for Team Associated trucks fit into the end of the set screw that goes into the carrier. I havn't had any problems again with blown bearings or loosening set screws. Excellent Product!
Robert J.
Verified Owner
RPM Pillow Ball Set Screws & Bushing Caps
I purchased these for my Associated MGT 4.60. I cant give them a perfect review though. The set screws, were almost impossible to install without cross threading. I think I got 2 perfectly out of the 8 to go in straight. I think if they would have made them coarse thread this would have not been a problem. Other than that they seem to be working fine. Also with the MGT, you will need to grind one side flat on the axle pins in order to reinstall your axles correctly due to the bearing spacers required for this truck.
View all reviews (2)
Related Products
Customers also purchased...