Check Store Availability
Please be aware that pricing and product availability in-store may vary from what’s available online because each store is independently owned and operated.
RPM81012
RPM
Related products 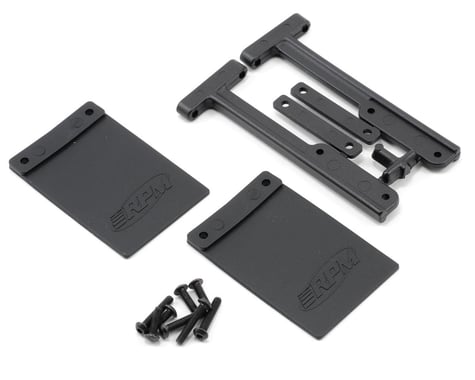 The Traxxas Slash is arguably one of the best and most authentic replicas of a modern Short Course Truck. Unfortunately, it’s lacking in a critical detail than many other manufacturers have incorporated into their trucks, which would be mud flaps. That is no longer an issue! RPM now has a mud flap system that integrates with our new Rear Bumper for the Traxxas Slash (RPM #81002, #81003 & #81005). The RPM Mud Flap System uses a pair of molded nylon support arms that bolt to pre-existing holes in the RPM bumper supports of our Slash rear bumpers. These support arms hold a set of well-designed rubber mud flaps that incorporate the molded RPM Logo on one side and are blank on the other. The end user can decide which side they would prefer to show. One final touch is a pair of molded screw supports that help prevent the screws from pulling through the soft rubber of the mud flaps.

Tech Notes:
The RPM Mud Flap System is designed to work with RPM Rear Bumpers for the Traxxas Slash only (RPM #81002, #81003 & #81005). They will not work with stock or other aftermarket rear bumpers

This product was added to our catalog on October 9, 2009