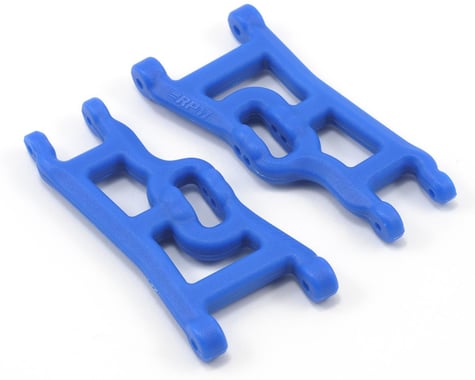 Out Of Stock Online
You may back order this item and it will ship when it arrives.
$1.99 flat rate shipping! Learn More
Back Order
Save In List
Read Reviews Write a Review

This is an optional RPM Front A-Arm Set, for the Traxxas Slash 2wd, Nitro Slash, e-Rustler & e-Stampede 2wd. These arms are built to withstand abuse. Plus, they shave some unwanted unsprung weight as well! RPM Front A-arms are nearly 25% lighter than stock versions of the same A-arms, and are backed by RPM's world-renowned breakage warranty. Additionally, RPM has increased clearance areas in the outer portion of the A-arms to allow increased droop travel when used in conjunction with RPM oversized bearing carriers (RPM80372 & RPM80382).

RPM front A-arms for the Electric versions of the Traxxas Slash, Rustler & Stampede are sold in pairs and are available in black, green, blue and red. These A-arms are molded with what is fast becoming an RPM trademark design of angled leading and trailing edges to reduce frontal edge mass and improve the a-arm’s ability to ride up and over tall obstacles instead of slamming into them. RPM A-arms are extremely rigid for superior ride and stability over the roughest tracks and terrain.

SHO
Verified Owner
RPM Front A-Arms (Blue) (Rustler, Stampede & Slash) (2)
Ok here is the truth: RPM Front A-arms are the perfect combination of strength and durability, with just a touch of flexibility to save you when all other parts would have exploded like a parked smart car vs. a speeding 80,000lbs. semi truck. Yes they can break, but in a hammer like way: well used or a completely random fluke. I've never had any issues and they fit better then Mechanics Gloves.

Take it from someone who bashes his over-weight, over-powered slash almost daily.

R. Rugged
P. Performance
M. Masterpiece
4 customers found this review helpful.
User
Verified Owner
RPM Front A-Arms (Blue) (Rustler, Stampede & Slash) (2)
DOESN'T FIT WITH RPM BEARING CARRIERS. RPM looks and feels good. But they have lousy dimentional engineering. The hinge pin nub is wider than the stock arm which is great. But pair it with the RPM bearing carrier and the extra dimention of that part along with this one makes the two bind when the front wheels are turned left/right. Had to replace the bearing carriers with stock parts in order to clear the extra thickness of the hinge pin.
View all reviews (2)
Related Products
Customers also purchased...