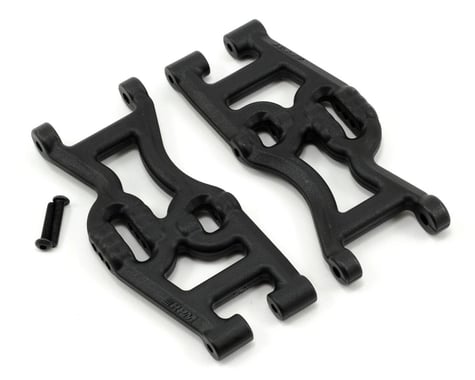 This is an optional RPM Front Arm Set, and is intended for use with the  Durango DESC410R. RPM engineers have decided to tackle the notoriously fragile DESC410R A-arms, redesigning them to eliminate the weakest link in the truck. The hinge pin areas have been beefed up and in some areas are over 50% larger than stock to support the relatively small 3mm hinge pins. RPM has also eliminated as much as .004” (.1mm) of slop from some of the hinge pin areas. Thicker support beams using trapezoidal shapes provide strength, while RPM's proven blend of top secret materials provides the durability needed for these incredibly fast trucks.

RPM front A-arms swap the stock front suspension arm bushings from the outside of the A-arm to the inside. The reason is simple – the screws holding the front C-hub on stock A-arms press the bushings into the C-Hub, causing a bind over time. The RPM design flips the bushings around to the opposite side so the flanged side of the bushing rests between the C-Hub and A-arm (placing metal between two pieces of plastic) accomplishing two goals; It smooths out suspension movement and prevents the bushing from gouging into the C-Hub.

RPM DESC410R A-arms also weigh less than the stock “v1” A-arms by 1.5 grams each, for a total weight loss of 6 grams or almost a quarter ounce when using both front and rear A-arms. That number becomes even larger when compared to DESC410R “v2” A-arms. Whether racing, bashing, or anything in-between, RPM A-arms are your DESC410R solution!