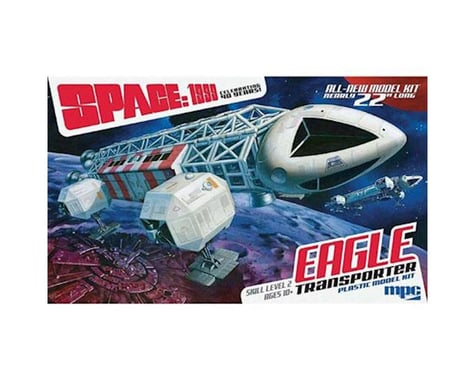 The Eagle Transporter is a fictional spacecraft seen in the 1970s iconic British television series Space: 1999. The Eagles serve as the primary spacecraft of Moonbase Alpha, which had a fleet of them used to explore alien planets, defend Moonbase Alpha from attack, and to transport supplies and other items to and from the Moon. The Eagle was designed by Brian Johnson who had worked with Gerry Anderson on Thunderbirds in the mid-1960s and had produced spacecraft for the 1968 film 2001: A Space Odyssey. The Eagle spacecraft influenced the spaceship designs of Star Wars and other science fiction films and television series.

MPC now releases an redesigned large format kit of the ship. It has been exhaustively researched for accuracy and features spring-loaded landing foot pads, pilot figures and all decals needed to fully decorate the ship.