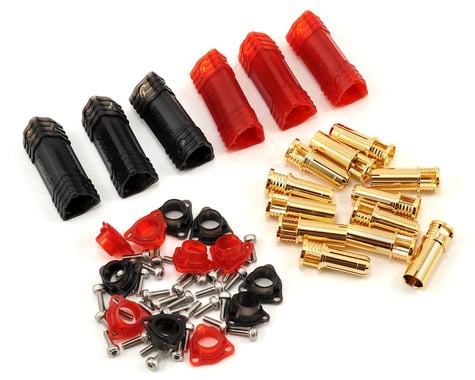 Out Of Stock Online
You may back order this item and it will ship when it arrives.
$1.99 flat rate shipping! Learn More
Back Order
Save In List
Read Reviews Write a Review

Check Store Availability
Please be aware that pricing and product availability in-store may vary from what’s available online because each store is independently owned and operated.
RCPROPLUS Pro-X6 Supra X Battery Connector (6 Sets) (8~10AWG)
Ryan
Verified Owner
RCPROPLUS Pro-X6 Supra X Battery Connector (6 Sets
I have purchased four sets of these so far and while they function well, I absolutely hate the fact that you are forced to purchase TWICE as many as you really need.

The issue is they come with enough plastic housings to do three batteries and three devices (charge leads). I have four times as many batteries as I do charge leads, so I end up with half of each package left over because the plastic housings won't work for the batteries (unless you really want to put black on red and red on black)... didn't think so.

I have contacted RCProPlus directly, AMain over eight different times and nothing has been done. Virtually every other battery mfg offers both battery and device housings in addition to the combo package. All that would be needed to be done would be to offer the plastic housings in packages separately and these would get five stars.

As it sits now I have twelve more batteries ready to go and not wanting to waste another 12 connectors trying to get the 12 I need.

I don't like leaving a review like this, but I have been trying to get this resolved for over eight months!!!
4 of 6 customers found this review helpful.
simon vaamonde
RCPROPLUS Pro-X6 Supra X Battery Connector (6 Sets
Best connector that you can find, really easy to solder, you can adjust the tension and it click when is properly connected btw you can reuse!!!
PilotHal
RCPROPLUS Pro-X6 Supra X Battery Connector (6 Sets
I received these connectors the other day and the end result is really nice. They were relatively easy to solder and assembly was a breeze. Surprisingly, once the keepers are snapped in to place, this connector is rock solid. The bullets have a "click" to them and seat firmly - they're not coming apart, no way. However, they do release with a nominal amount of force. Really nice feel to them.

The one thing that I do not like is that the connectors are not marked + or -, which I think is bad. A few pictures I saw online had the positive lead inserted in to the smaller hole on the ESC side. Of course, I assembled them backwards. Using an Xacto, I was able to pry the plastic keepers apart with no damage, swap the leads, and apply the keepers again. They snapped together no problem and with no damage. So that was cool. That's the only downside is that the connectors aren't marked, so if your buddies adopt this connector and you wish to share batteries or chargers at the field, be sure they wired theirs up the same as you!

Besides the lack of nomenclature on the connector, one concern is that a 10AWG wire does not completely fill the bullet connector; so at best you make contact with one side, the bottom, and the rear of the bullet. Soldering is best done with their jig, so I ordered one just for the sake of trying something new. Given the amount of material that they have removed from the bullet to provide soldering "windows", I'm wondering how they are establishing the high current rating for this bullet connector? I did my best to form a good solder joint as stated; not sure why they added another soldering window (the hole in the rear). Wouldn't you want as much of the bullet to come in contact with the wire? Especially in a high-current application?
Anyway, for anyone seeking an alternative to an EC5 in a 12S configuration these connectors are awesome. I will swapping out my EC5's for this bad boy!
0 of 1 customers found this review helpful.
View all reviews (2)
Related Products
Customers also purchased...