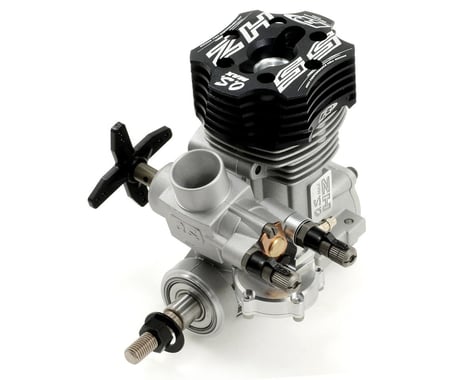 In Stock Online
Usually ships in 24 hours
FREE Shipping Eligible! Learn More
Add to Cart
Save In List
Note: Manufacturer does not allow coupons
Check Store Availability
Please be aware that pricing and product availability in-store may vary from what’s available online because each store is independently owned and operated.
This is the O.S. .55 HZ-R DRS Ringed Competition Helicopter Engine. The maneuvers in F3C competitions increase the level of performance these days not speak of 3D flight. This means the pilots demand more performance on its power source: engines. O.S. Engines has responded to the market demand on the cutting edge, which is always changing. The DRS (Demand Regulator System) is the ideal fuel supply system, which uses the primary pressure and improves your flight performance.

The DRS is developed for supplying ideal air-fuel mixture as pilots desire. A fuel tank is pressurized by the pressure from the nipple in the back plate via one-way valve so that the fuel is pumped to the regulator. The regulator picks up the negative pressure created in the venturi and supplies fuel consistently by controlling check valve according to carburetor opening. The carburetor is equipped with two needles to adjust middle and high speed precisely. The cover plate has a mounting hole to set a sensor of Futaba GY-701 governor, which secures more stable flight.

This product was added to our catalog on February 15, 2011

Donald Holder
O.S. 55 HZ-R DRS Ringed Competition Helicopter Engine
Excellent engine for heli use. I have 2 of them and give them my best recommendation!
View all reviews (1)
Related Products
Customers also purchased...