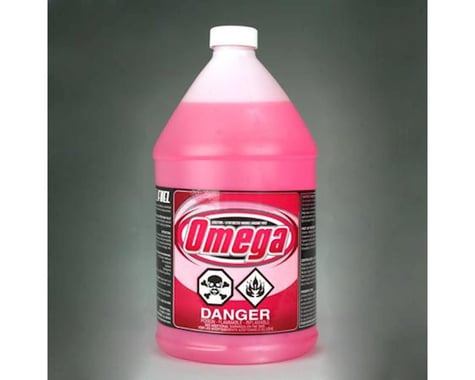 In Stock Online
Usually ships in 24 hours
Add to Cart
Save In List
Read Reviews Write a Review
Check Store Availability
Please be aware that pricing and product availability in-store may vary from what’s available online because each store is independently owned and operated.
This product may only be shipped via Ground and will have HAZMAT fees applied!

Ultimately the performance of your engine depends on the oil that lubricates it. And engines that need the addition of castor oil perform best on the world’s leading castor/synthetic fuel Omega.

In our nearly 30 years of experience we’ve developed many ingenious solutions to the problem of model engine lubrication. For example by using a degummed and fortified castor oil in combination with our Ultra-high Viscosity Synthetic Fluids, we’ve managed to minimize the negatives of castor (excess carbon) while gaining the maximum positive effects (anti-scuffing properties and lean-run protection). Another important benefit of our castor mix is it’s cleanliness which allows us to use a more protective 30% mixture rather than the 20% used by most other manufacturers.

Randy Cox
Verified Owner
Morgan Fuel Omega 15% Fuel (Four Gallons)
Bought this fuel to run in my nitro 4 stroke airplane (magnum 52) and it has been a very good fuel so far. Half a gallon through the plane. I am finishing up a nitro truck (traxxas 2.5) and am going to run this same fuel and see how it does there, but so far I have no complaints. Starts easy, runs smooth. I prefer safe, long lasting fuel over max top performance at the risk of longevity.
View all reviews (1)
Related Products
Customers also purchased...