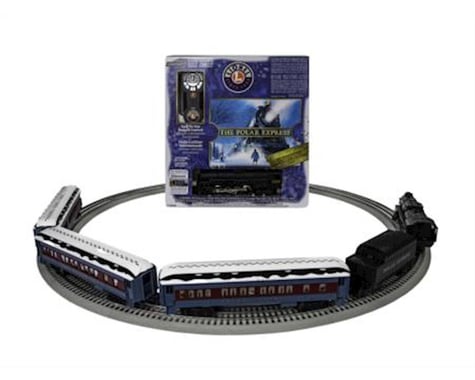 In Store Only
Read Reviews Write a Review
Check Store Availability
Please be aware that pricing and product availability in-store may vary from what’s available online because each store is independently owned and operated.
This item is only available for purchase exclusively from our retail stores. Click here to find a store near you. You may want to search our site for a similar item.
Note: Manufacturer does not allow coupons
The Polar Express™ has been capturing imaginations and hearts for over 30 years and Lionel has had the privilege to be a part of it. Lionel has developed a highly decorated and enhanced The Polar Express LionChief set equipped with Lionel's LionChief Bluetooth technology. This will give you smooth operation and better sounds all by running the Polar Express train with your smart device.

Scott Gajdos
Verified Owner
Lionel O-27 LionChief The Polar Express Set w/Bluetooth
This train is very cool! The detail is amazing. It runs very smoothly and the sounds are realistic. The train it's very simple to set up. We use it under the tree. Everything comes well packed (save the packaging because you'll need someplace to store it most of the year). The included remote is nice. Very simple to use. The best feature of this set has to be the Bluetooth connectivity via Lionel's app. You can customize the audio levels of the various sounds and even set up a maximum speed so your kids don't run it off the rails! Pretty much the whole setup is made of plastic, except for the rails themselves and the locomotive. That locomotive is a SOLID little unit! Seems to be all metal and very heavy. Built to last and to live up to Lionel's reputation.
1 customer found this review helpful.
View all reviews (1)
Related Products