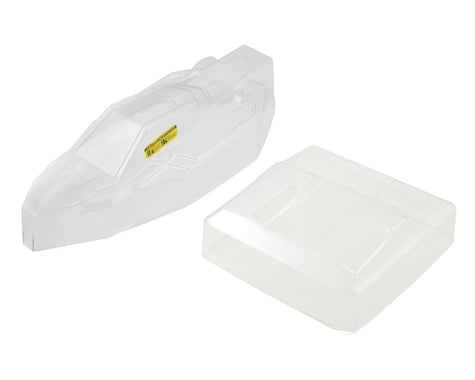 $6.49 - ProTek RC "TruTorque" Lexan Scissors (Curved) (addon details...)
None
Add to Cart
Save In List
Read Reviews Write a Review
Check Store Availability
Please be aware that pricing and product availability in-store may vary from what’s available online because each store is independently owned and operated.

The JConcepts "F2" style bodies have been attracting attention at tracks all over the globe due to it's aggressive look, and proven function both on the ground and in the air. Aspects & design influence was taken from the original Finnisher bodies, the F2 is the latest body design, which has been designed specifically for the latest generation of 1/10th scale off road racing.

The F2 body is a drop fit for the popular XRAY XB2. Cut-lines are included on each side of the body to accommodate stand-up and lay-down transmission layouts giving all out versatility. With the evolution of race tracks, complicated circuits combining more aggressive jumps and extremely high-speed corners, JConcepts incorporated many features which provide several benefits in the most critical situations. Increased windshield angle provides a steady force upfront during mid-flight wind gusts on large jumps. Forward cab placement changes performance / visible bias which helps steering rotation in low traction corners.

In addition to the newly designed body, JConcepts has included two of the latest Aero rear wings used by Ryan Cavalieri, Ryan Maifield and Spencer Rivkin to a 1st, 2nd and 4th place finish at the 2017 Reedy Race of Champions.

fefefes
JConcepts XRAY XB2 "F2" Body w/6.5" Aero Wing (Clear)
Pretty thick and tough. Cutting was not to the best as compared to stock xb2 but it fits well overall (other than the front part of the chassis where it will leave a small gap at the narrow edge). I am using xb2 2020 and the nose fits well. Just take note to leave more room and not cut exactly to the seams of the body given and it will be all right. The wing is the best I have tried so far. Stable and quick at jumps.
Ben Jones
Verified Owner
JConcepts XRAY XB2 "F2" Body w/6.5" Aero Wing (Clear)
This JConcepts after market shell isn’t great. Two complaints I have are: 1). The cut outline around the nose area isnt marked out incorrectly plus it is also too short in length. The shell cannot be moved forward because if that happens then the sides won’t marry up perfectly to the chassis. 2). Side skirts are too short and doesn’t completely cover down to the bottom edge of chassis.
Summary: Trashed the shell, lost money but to look on the bright side I’ve now got two new spare rear wings!..
View all reviews (2)
Related Products
Customers also purchased...