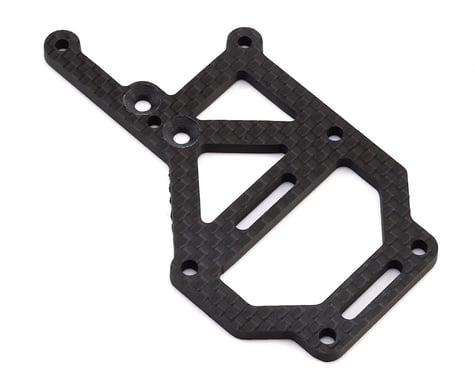 This is the optional JConcepts Carbon Fiber Off-Set Upper Deck Fan Mount for the Tekno EB410. JConcepts adds to the list of performance parts for the EB410 with a carbon fiber upper deck. The upper deck offsets the position of the fan mount which allows several benefits. The first is the ability to use the JCO0354 JConcepts F2 body as the carbon fiber part shifts the fan over to clear the low-profile cab of the body.

The secondary benefit realized after testing the upper deck is the ability to use a taller fan. This is a benefit not exclusive to the JConcepts body but to all low-roof body shell types because taller fans are typically more powerful and move more air.

Another positive to the JConcepts carbon fiber upper deck is the slight position change of the fan allows some lower power fans to work better without the force of the motor magnets affecting the fan, bearings or rotation.

DeShaun Dash
JConcepts Tekno EB410 Carbon Fiber Off-Set Upper Deck Fan Mount
This a very nice upgrade over the Tekno factory carbon option Center diff top plate. The quality and machine work is top notch I would say the same as the factory upgrade. The benefit is you can use all low profile bodies and the drag the motor magnet put on the fan is eliminated because fan is more centrally located. Had a WTF fan and the motor magnet completely stopped the fan when throttle was pulled. This mount cured it. You will need 2 flat head 3x8 or 3x10 hex screws they are not included.
3 customers found this review helpful.
View all reviews (1)
Related Products
Customers also purchased...