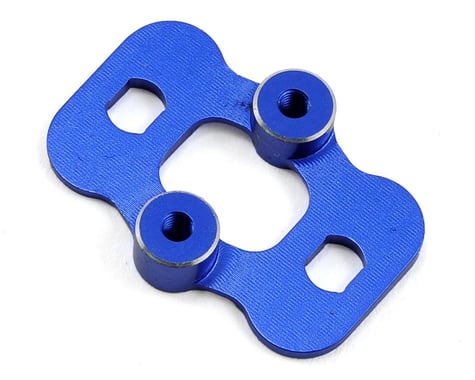 Check Store Availability
Please be aware that pricing and product availability in-store may vary from what’s available online because each store is independently owned and operated.
This is an optional JConcepts B5/B5M Aluminum Wing Shim. B5 drivers have the option of changing wing angle by changing the direction of the shim or change the height by running the shim below or above the wing. JConcepts is now offering this machined aluminum wing shim to provides a more ridid assembly. The edges are finished with a small highlight chamfer where possible to provide that all important glamorous look.

The shim is light-weight and has built in screw bosses on each side to allow the driver to completely secure the shim to the wing with 3mm screws (not included) front and back. The shim has a built in rake of 3 degrees in one direction and shaped to fit around the stock plastic wing mounts or part of the JConcepts screw-down aluminum wing mount system. Utilizing the shim in one direction gives the wing zero degrees or in the opposite direction gives 6 degrees of angle. Placing the shim on top will angle the wing at 3 degrees.