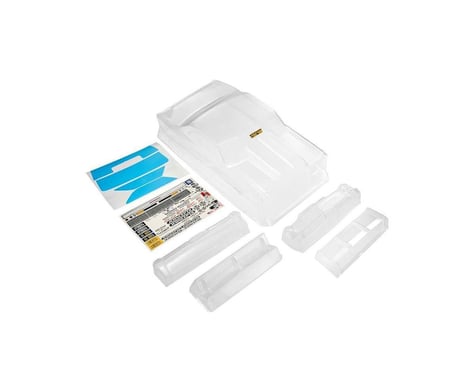 In Store Only
Read Reviews Write a Review
Check Store Availability
Please be aware that pricing and product availability in-store may vary from what’s available online because each store is independently owned and operated.
This item is only available for purchase exclusively from our retail stores. Click here to find a store near you. It has been replaced by JCO0398.

Sometimes it's necessary to enter a new market with a shocking new product or discovery. JConcepts enters the R/C Drag racing community with a highly sought-after original. The 1966 Chevrolet II Nova is a classic, and with this vintage styling, a lot of thought was put into the design to incorporate the detail in to this legacy superstar.

This 1966 Chevy II Nova shows off an extensive sharp-edged restyle based in part on the Super Nova concept vehicle. In general, proportions are squared up and features including a bold grille and semi-fastback roofline highlight the shape. "Humped" fenders in an angular rear-end were reminiscent of other Chevrolets from the era of style.

The JConcepts 1966 Chevy II Nova Street Eliminator Body was developed in collaboration with Chevrolet to incorporate the heritage while also including options to bring out the street racer appeal. The main shell is comprised of three pieces which includes intricate detail for the front and rear. The front-end closure shows off the single headlight style with deep recessed sections along the grille and front bumper to faithfully replicate the original.

The rear closure section includes bumper detail, trunk works and vertical taillight cues. Aligning the front and rear sections are critical, but after a little paint and detailing, the Chevy comes together in magical fashion. In addition, the design team added a rear wing sectional to the project to bring the drag racing inspiration to life. The two-piece rear wing is trunk mounted with a lower support and upper wing with high-speed stabilizing ribs for added performance.

NOTE: Painted and completed vehicle shown for illustrative purposes only and is not included.