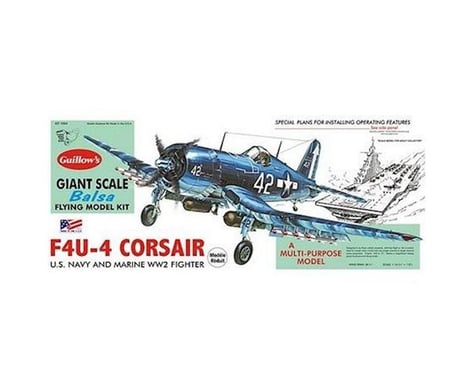 Save In List
Read Reviews Write a Review
Check Store Availability
Please be aware that pricing and product availability in-store may vary from what’s available online because each store is independently owned and operated.

Nicknamed the “Sweetheart of Okinawa” by the U.S. Marines and “Whistling Death” by the Japanese, the Corsair performed effectively in two years- the Pacific conflict of World War 2 and the Korean engagement of the early 1950’s. The first production Corsair flew on June 25, 1942 at a time when the Japanese offensive seemed irresistible. It was not until late that year, with the delivery of the first Corsair squadrons into the hands of the U.S. Marines on Guadalcanal and the Solomon Islands, that the tide of air combat was permanently turned in favor of the Allied Forces.

Vincent Aiello
Guillow Vought F4U4 Corsair
so far very good,I need to make my first purchase before I can rate before this site.From all indications the site should be good to work with
View all reviews (1)
Related Products