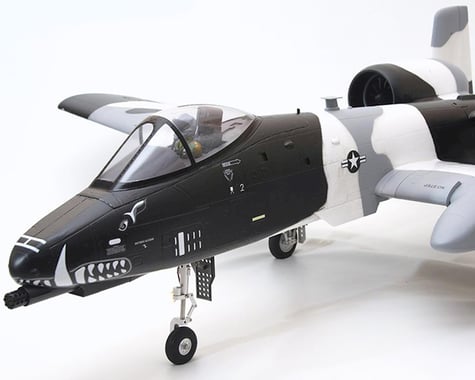 Out Of Stock Online
You may back order this item and it will ship when it arrives.
Back Order
Save In List
Read Reviews Write a Review

Check Store Availability
Please be aware that pricing and product availability in-store may vary from what’s available online because each store is independently owned and operated.
Note: Manufacturer does not allow coupons
This item is eligible for Super Saver Shipping Learn More
This is the FMS A-10 Thunderbolt II “Warthog” V2 70mm EDF Plug-N-Play Electric Ducted Fan Jet Airplane, an evolution of FMS's Flagship model - The A-10 Thunderbolt II. This kit was known for its scale features and performance, making it a favorite among pilots.

With such a solid base, FMS decided to build on and upgrade this model even further to deliver the next level of performance. Retaining features such as the screw-together air-frame, ball-linked control surfaces and high strength spar system, the A-10 V2 comes together just as easily its predecessor. Scale details remain impeccable- realistic rivets, panel lines, removable bombs and rockets and realistic absorbing CNC landing gear, just to name a few.

Built upon these great features, the A-10 V2 receives ten major structural, electronic and scale improvements: