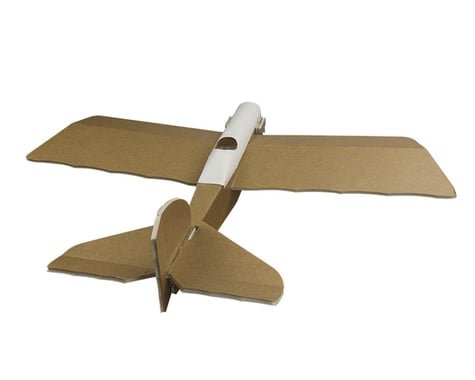 $3.99 - Flite Test Mini Wheel 1.1" (addon details...)
None
Add to Cart
Save In List
Read Reviews Write a Review
Check Store Availability
Please be aware that pricing and product availability in-store may vary from what’s available online because each store is independently owned and operated.

The Flite Test Mini Scout is a 3 channel slow flyer that ANYONE can enjoy! This Mini is perfect for backyards, gymnasiums, and indoor fly-ins. The FT Mighty Mini Scout can be flown with the recommended electronics below or modified to accept the electronic components from common ready to fly micro aircraft with 10 gram brushless set ups or larger. Their gentle flight characteristics and incredible durability makes this a great and rewarding platform for beginners and experienced pilots alike.

Power Pack Compatibility:
Flite Test Airplanes are all designed around the use of various "Power Packs" which include an inexpensive Motor, ESC, Servo, & accessory package to complete each aircraft!

Eventually I upgraded it to a 2204, added ailerons, an old Naze flight controller and an all in one FPV camera. It easily became my favorite plane to fly. It was small, durable, fast, and reasonably aerobatic. The only downside was that with all that weight and power the flight times dropped to ~5 minutes on a 450 or ~10 on an 850.

Flying this little plane FPV with a flight controller was amazing. With those little digital servos I was able to tune it to be rock solid stable. I regularly flew it inverted 3 feet off the ground at full throttle just because I was able to do it with my mediocre skills. So I found it to be a good mini plane I could mold to do whatever I wanted it to do.

The only reason I hesitate to give it a full five stars is because as built from the kit, the wings are sort of fragile. My neighbor friend went through two of them and lost wings on fairly mild crashes. It looked like the culprit was the notch at the front of the wing for the power pod. I ignored that when I built mine and the wing lasted through dozens of much higher speed crashes.
Dale Miller
Verified Owner
Flite Test Mighty Mini Scout Speed Build Electric Airplane Kit (609mm)
I have to say that this is a very impressive little airplane. Got my kit and assembly was quick and easy. Not to mention I do like the options of Electronics currently available and all you really need is a good radio. So far overall it is definitely meeting my expectations and definitely helping me to get back into the hobby. Considering I haven't flown in so long and thanks to the mini Scout I'm getting back into the swing on the sticks. Excellent for beginner and trainer. So overall I highly recommend this product.
View all reviews (13)
Related Products
Customers also purchased...