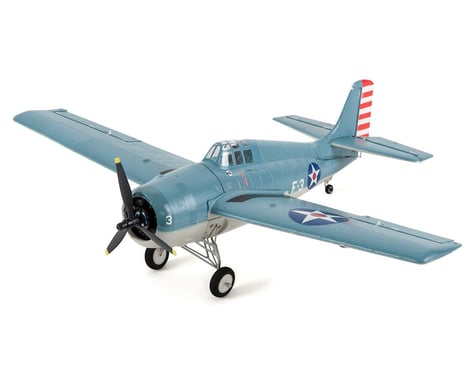 Discontinued Online
Read Reviews
(1) Average Rating:5
Write a Review
Check Store Availability
Please be aware that pricing and product availability in-store may vary from what’s available online because each store is independently owned and operated.
This item is discontinued and no longer available for purchase. You may want to search our site for a similar item.
Note: Manufacturer does not allow using discount coupons

From Pearl Harbor through 1942 the F4F Wildcat was the only U.S. fighter in the Pacific capable of thwarting Japan's naval air forces. Although slower and less maneuverable than the vaunted Zero, its heavier armor, self-sealing fuel tanks and rugged airframe could often help a skilled pilot overcome this performance gap and live to fight another day. Edward "Butch" O'Hare was just such a pilot. He distinguished himself in a Wildcat by becoming the U.S. Navy's first fighter ace and earning the Congressional Medal of Honor. This ultra-micro recreation bears the markings of O'Hare's aircraft and is a tribute to him and all the other Wildcat pilots who faced the might of an empire and prevailed.

Powerful 3000Kv 180-Size Brushless Motor with a 3-Blade Prop
In addition to the speed and climb performance of a brushless motor, you also get the realism of a 3-blade propeller that perfectly complements the model's other scale details. The power system is designed for use with a 200-280mAh 2S 7.4V LiPo battery (sold separately). An E-flite® 280mAh 2S 7.4V 30C pack is recommended.

AS3X Stabilization Technology
The AS3X technology built into the receiver works behind the scenes to smooth out the effects of wind and turbulence. It does so using a combination of 3-axis sensing and exclusive flight control software tuned by expert RC pilots. Best of all, it feels completely natural. There is no delay in control response or limits on the model's agility. You will simply feel like you are flying a larger, expertly tuned model that goes right where you point it.

Unrivaled Scale Detail
The outline of the model is designed to look incredibly scale from any angle. The trim scheme and markings are that of the aircraft flown by Butch O'Hare during World War II. Other details include a clear canopy with pilot figure, cowl flaps, molded panel lines and more.

Realistic Removable Landing Gear and Steerable Tail Wheel
The main landing gear models the intricate design of the full-scale gear with incredible detail. A molded cover is included that makes it look like the landing gear is retracted when the main gear is removed. Even the steerable tailwheel is positioned to match the appearance of the full-scale version.

Ultra Micro Maniacs
Verified Owner
E-flite Ultra-Micro UMX F4F Wildcat BNF Electric Airplane (515mm)
All three brothers of "UMX BL-WW2 Fighter series" are excellent aircraft, but each seasoned differently, it is fun to be able to feel personality in maneuvering.
"UMXP 47" has a sense of stability inferior to size of several classes with a heavy operation feeling, "UMXP 51 D" is a high performance that can do swift and amazingly agile maneuvers ...
And this "UMX F4F WILDCAT" is a balanced on-the-rail feeling balanced in high dimension from low speed to high speed,
I think that each person likes individuality, but with the skill of the level of myself, this airplane is probably the only aircraft that can be lowered to the aimed target while this environment is strong.
E-flite will be the only manufacturer that can finish this unique individuality with the same gyro receiver.
When doing the AS3X tuning of the E-flite's Viking12 himself, the gyroscope setting which does not match the characteristics of the aircraft was only a detune.
Although it felt a lot of time and fought a lot, after all, from experiences settled in the tuning to match the correction strength to himself while leaving the directionality of the basic setting as it is, this plane that has been given a difficult gyro setting that exploits the aircraft characteristics and personality When I touched, I really wanted to praise E-flite and raising various hands.
I thought that this plane is a wonderful airplane that many people can enjoy from beginner to veteran, not to mention the WW 2 aircraft mania who loves F4F.