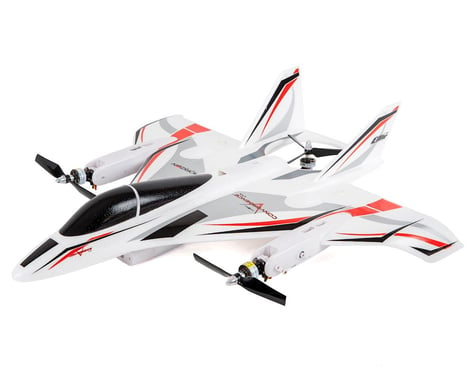 In Store Only
Read Reviews Write a Review
Check Store Availability
Please be aware that pricing and product availability in-store may vary from what’s available online because each store is independently owned and operated.
This item is only available for purchase exclusively from our retail stores. Click here to find a store near you. You may want to search our site for a similar item.
Note: Manufacturer does not allow coupons

Versatile multirotor or nimble sport plane? The Convergence VTOL park flyer is both! Its exclusive flight control software makes transitioning between multirotor and airplane flight easier than it has ever been before. It’s even FPV-ready!

VTOL (Vertical Takeoff and Landing) RC models are usually a mixed bag when it comes to performance. If they are stable, their speed and agility is often lackluster. If they are nimble, pilots have to work harder to transition between hovering and airplane flight. The Convergence VTOL park flyer changes all that. Its unique design and exclusive flight control software give you the best of both agility and stability while making the transition between multirotor and airplane flight so smooth and predictable, you will feel right at home your first time on the sticks.

Sleek and Simple
Unlike complex VTOL aircraft that rotate the entire wing and require as many as four motors to achieve vertical and forward flight, the Convergence™ park flyer uses a simple, yet sleek, delta-wing design with three brushless motors - two rotating motors on the wing and a fixed-position motor in the tail.

Exclusive Flight Control Software Makes it Easy
At the heart of it all is flight control software that has been expertly tuned by designer, Mike McConville, so almost any RC pilot can experience the fun of VTOL flight.

FPV Ready
The model is designed to accommodate several of the most popular FPV camera systems. There is a camera bay under the nose and a place to mount the video transmitter in the rear of the aircraft. Both locations are easy to access so installation takes just a few minutes.

Bind-N-Fly: Super-Simple Transmitter Setup
This Bind-N-Fly version can be flown with any full-range, 6+ channel DSMX/DSM2 aircraft transmitter and comes equipped with a Spektrum serial receiver that is connected to the flight controller. No complex transmitter setup or programming is required. You use your “GEAR” switch for selecting Stability or Acro mode and your “AUX 1” switch to transition between multirotor and airplane flight.