Check Store Availability
Please be aware that pricing and product availability in-store may vary from what’s available online because each store is independently owned and operated.
BAN192078
Bandai
Related products

Be the first to write a review!
Add To Cart Save In List
In Stock Online!
Usually ships in 24 hours 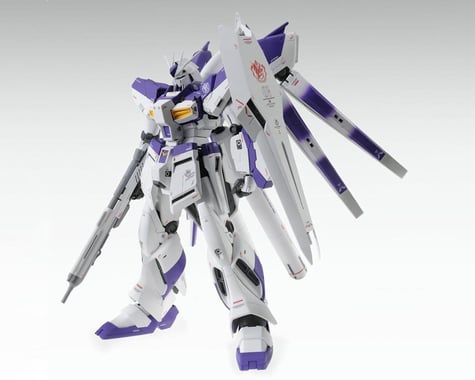 RX-93-2 Hi-Nu Gundam Version Ka "Char's Counterattack" originally appeared in the novel "Beltorchika's Children". This popular Hi-Nu Gundam is now available in a Master Grade plastic kit! Considered one of the most powerful mobile suits in the Universal Century timeline, Hi-Nu Gundam is a completed version of the prototype Nu Gundam that appeared in "Mobile Suit Gundam: Char's Counterattack," and comes armed with a beam rifle, beam sabers, shield weapon system, and an enhanced Nu hyper bazooka for some truly devastating offensive attacks.

It also features a revised fin funnel system that extends from the back like a pair of wings; each fin funnel is detachable and can be displayed with the included effect parts to simulate it flying towards its target, ready to fire! As usual with Master Grade kits, its inner body frame comes impressively detailed with working pistons and is highly articulated for lots of posing possibilities. A special display stand is included along with six bendable clear plastic rods to attach each fin funnel to the base. Markers can be purchased to outline panels for added details. This is a superb kit, of one of the best mobile suit designs that never appeared onscreen!