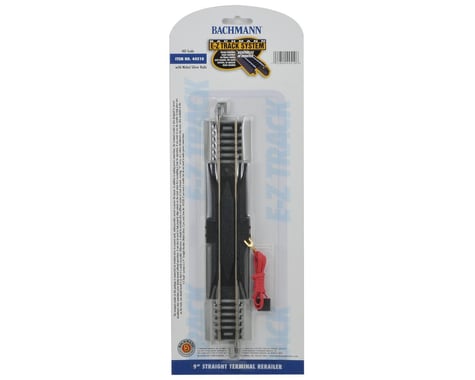 Save In List
Write the first review
Check Store Availability
Please be aware that pricing and product availability in-store may vary from what’s available online because each store is independently owned and operated.
This is a Bachmann HO-Scale E-Z Track Nickel Silver 9" Straight Terminal Rerailer with Wire. In addition to making power connections, the terminal rerailer is also designed to correct derailments that sometimes occur during normal railroad operations. Rerailers are installed after difficult sections of track (turnouts, crossings, “S” curves, etc.) where derailments may occur. The terminal rerailer is connected via terminal wires to a power pack, which provides current to power the layout. Nickel-Silver rails provide better conductivity and improved rust resistance.