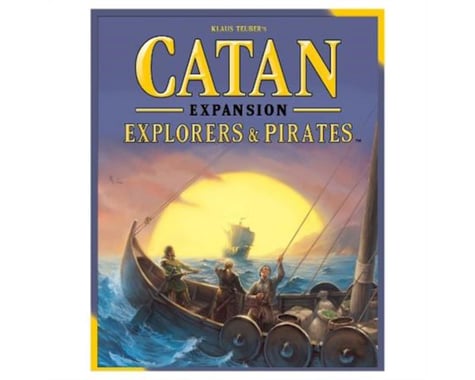 Catan: Explorers and Pirates Expansion is based on the Catan base game rules but also contains a number of new game mechanisms. For example, ships are now equipped for expeditions and can be moved freely across the board. In the ships you transport settlers, crews, fish, or spices across the seas. Your goal is to build new outposts on the islands that are still undiscovered and to complete the Council of Catan's missions in the most skillful way possible.

To set up the game, you need the game components from the Catan base game as well as new frame pieces and hexes from the expansion. This provides you with quite large a game board, allowing you to go on exciting journeys of exploration and discover new land.

Sound like a lot of content? Right – the expansion is definitely filled to the brim with content. You don't have to worry, though, because the Explorers & Pirates expansion has a modular concept. In scenario 1, the introductory game, you are familiarized with the basic rules; then, piece by piece, you play the other scenarios. Afterwards, you can take your pick which scenario(s) you would most like to play.

After you have played the first four scenarios, in scenario 5 – which bears the name of the expansion – you can complete all 3 previously described missions at the same time. Here, on the largest possible game board, you play until one of the players reaches 17 victory points. Playing this scenario for skilled Catan fans can easily turn the whole evening into an exciting experience