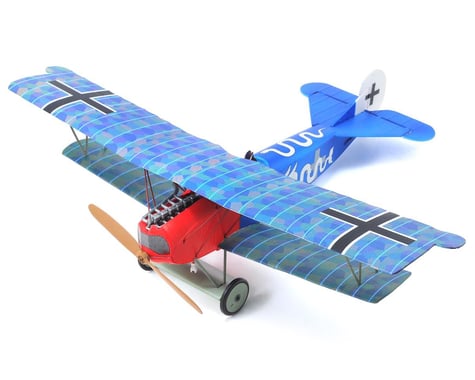 In Store Only
Read Reviews Write a Review
This item is only available for purchase exclusively from our retail stores. Click here to find a store near you. You may want to search our site for a similar item.
Note: Manufacturer does not allow coupons
Check Store Availability
Please be aware that pricing and product availability in-store may vary from what’s available online because each store is independently owned and operated.
The Ares Fokker DVII is a micro recreation of Germany's finest fighter of World War I. The Fokker D.VII had a short wartime career as it was introduced towards the end of the war in 1918. Pilots praised the aircraft's handling and ease of operation. Some 1000 examples were produced before the Armistice of November 1918 and manufacture continued post-war until a total of 3,300 had been built.

The AresFokker D.VII is a lightweight three-channel ultra-micro semi-scale model of the original. It features durable foam construction and numerous scale touches such as a scale engine and machine gun detail together with 4-color lozenge camouflage wings. Technically advanced the Fokker D.VII incorporates a Hitec Red 2.4GHz receiver that's compatible with all current Hitec 2.4GHz aircraft transmitters. Weighing only an ounce, the Fokker D.VII is ideal for indoor flight or outdoor flight in calm conditions.

Ultra Micro Maniacs
Ares Fokker DVII Micro Airplane RTF
Elaborate detail and not inferior to plastic model, colorful reproduction of special camouflage is very great. In addition to the ultra-ultra-light aircraft is of 25g, the designer of the passion has been condensed. I felt even madness in its thorough making.

Ares has realized "may be decorate be allowed to fly" by both the two. It is really wonderful. I will praise.

In the course flight performance has been compromise. Was the 3ch ladder machine specification, will because they choose the lightness. It exposed the only Not even weakness in environmental wind can not be carried out part of the basic maneuver for that.

Because scale models of the Ultra-Micro size in the selection of what I will agree.

We recommend this airplane. And scale airplane that love veteran, a person can use the gymnasium, to those who feel the fetish to Ultra-Micro airplane like me.

https://www.youtube.com/watch?v=UIV65A8t03g
2 of 3 customers found this review helpful.
Don Desalvatore
Ares Fokker DVII Micro Airplane RTF
1st flight,. It flew great, no bad tendencies at all. Slow flight indoors was amazing. Cons: Ever new battery the servos needed to be trimmed extensively before flight. 2nd flight nice flight same response. 3rd attempted takeoff rudder servo locked in left turn. that was the end of that.
Pros: good looking plane. quite the presents in the air. Slow flight with responsive control surfaces. wish I could have flew it more.
J.D. Little
Ares Fokker DVII Micro Airplane RTF
Here are the cons, in my opinion. It banks to the right so I had to give it quite a bit of left rudder trim and it is also tail heavy so I had to add some down elevator to it. The decal was bubbled under the lower wing, it also has a place on the frame where it looks as if it had gotten smashed a bit but nothing too bad. Extra batteries, cant find any.
Pros. It is an easy flyer, as long as there is no breeze. It looks good. Its lite so when it goes down it doesnt hit hard. Did I mention that it looks good?
All in all I am happy with it, until I need a new battery.
View all reviews (3)
Related Products