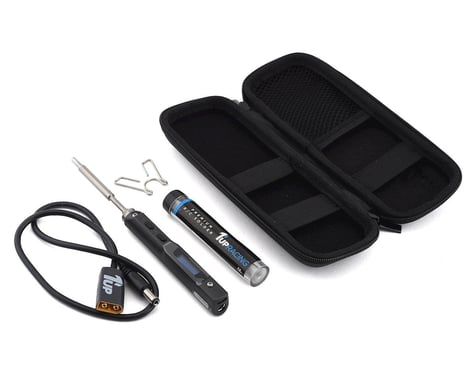 In Store Only
This item is only available for purchase exclusively from our retail stores. Click here to find a store near you. You may want to search our site for a similar item.
Check Store Availability
Please be aware that pricing and product availability in-store may vary from what’s available online because each store is independently owned and operated.
The 1up Racing Pro Pit Iron is a next generation race oriented soldering iron. The best way to describe this feature packed tool is "small but mighty". When connected to a 24v power source, the Pro Pit Iron heats and is ready to use in just 10 seconds! An easy to read LCD display offers accurate adjustment of the 200-750°F (100-400°C) temperature range. 1up Boost mode offers a nearly instant temperature increase to 450°C (850°F) at the press of a button, making easy work of thick gauge wires! The Pro Pit Iron automatically cools to 200°C after 2 minutes of inactivity to prolong the life of the tip, and shuts down completely after 10 minutes of inactivity.

NOTE: 1up recommends a 5S to 6S LiPo battery for the best performance.

Chad McKinney
1UP Racing TS100 Pro Pit Soldering Iron w/ DC Cable and Leather Pouch
TLDR:
-Great iron on 19+ volts
-Really under powered on 12 volts
-If you have a 12 volt power supply you might want to look into the MPS or Maxline 12-volt portable soldering stations.
-Light and small. Easy to fit in pit bag. Case is about the size of a case for sunglasses. This advantage may be offset if you need
to carry an additional power supply, booster, or 5s or 6s battery to power the iron appropriately.
-Yes, this is just a TS100 iron, but with thoughtful accessories for RC included: updated firmware, big tip for soldering things that
we typically solder, simple stand that works well and takes almost zero room.


Yes, this is a re-branded TS100 iron sold by many sellers under many different names on eBay, Amazon, banggood etc. for around $70 with a 19V power supply and some other accessories.

Why would 1Up rename this product? Of course so they can put a premium well-recognized name in RC on it and bundle it with their accessories and charge more for it. BUT is it worth the upcharge? You do get a nice carrying case that would probably cost around $10 if purchased separately as well as a XT60 to 5.5mm x 2.5mm barrel plug adapter that would run you another $10 to purchase separately. You also get a tube of 1Up solder, which turned out to be very nice (I typically use Kester) that sells for $7. However, 1Up does not include the laptop-style 19 volt power supply to power the unit, which runs around $12 from what I've seen. All-in-all, it's NOT a great value compared to buying a TS100, but it's not like 1Up is straight up ripping you off either. You get a well-packaged, very portable iron with thoughtful accessories that are useful for those of us that are using this for RC purposes. It is also equipped out of the package with the upgraded firmware that has features like battery cutoff and boost mode.

Is it any good at soldering? With a caveat, it is a wonderful soldering iron that should be able to tackle any soldering job you need to do in RC. That caveat is it's not really meant to operate on less than 19 volts, despite being spec'd to run on ~12-24 volts. I envisioned being able to simply plug this into my 12 volt HP server power supply that runs my iCharger and using it at a lower than the advertised maximum 65 watt output and that actually works fine on smaller jobs. It was able to do a great job soldering 16 gauge wire onto motor tabs. When trying to solder 14 gauge wire to 4mm battery terminals the 12-volts was insufficient to melt the solder and I watched the temperature on the OLED display plummet from a preset 750* F to under 500* immediately upon applying heat to the connector. Initial warm up and recovery on 12 volts is also very slow.

To combat this issue, I'm currently in the process of building an outboard 12 volt to 24 volt boost converter. Testing on 24 volts shows this iron is plenty powerful to make quick work of even large gauge wires on large connectors. It comes with a large tip and the 65 watts at 24 volts is every bit as powerful as something like the Hakko 888. Initial warm up and recovery is extremely fast on 24 volts as well.

The problem I have with this is now I have taken what was supposed to be an ultra portable soldering iron and I will now have another small box to carry around to make it perform adequately. If I had known this going in I might have gone with the Maxline (AKA MPS) soldering iron that isn't quite as compact, but is designed to be run off 12 volts.

My last observation of the 1Up iron is that while extremely light, it's not quite as comfortable to hold onto for extended periods as a traditional iron that is a little larger in diameter and has the cushioned grip where your fingers typically rest. For quick track-side soldering jobs that arise this point is pretty much moot.

Would I purchase it again? No. knowing what I know now, I would have gone with the MPS (same iron as the Maxline, but considerably less expensive - same price as this 1Up). While the 1Up iron works well on 24 volts, I've now invested in another $20 of parts beyond the original $99 investment for a 12 volt to 24 volt 4 amp booster, an enclosure to house that in and the wiring and connectors to hook it up to my power supply and the iron. While it still takes up way less space than the Hakko 888 I was carrying around, it is annoying to have to carry this extra equipment.

If you are using a 19-24 volt power supply or already have and don't mind carrying a 5s or 6s LiPo battery to power your iron, then I could 100% recommend this iron to you. I purchased it so that I could rid myself of an additional heavy tote that I need to take to the track for the off-chance I would need to do a quick soldering job. To that end, I have succeeded. Even with the 12 volt to 24 volt booster this easily fits into my hauler bag (my Hakko 888 did not) and adds very little weight. If this worked better on 12 volts, I would definitely give it a 5-star rating, but as far as I can tell it's only a 17 watt iron on 12 volts, which is what most of us have for power supplies, and 17 watts is adequate only for small jobs.
1 customer found this review helpful.
matthew prior
Verified Owner
1UP Racing TS100 Pro Pit Soldering Iron w/ DC Cable and Leather Pouch
Excellent speed in heating up, small size so easily transportable
Loving it!
David Hannigan Jr.
1UP Racing TS100 Pro Pit Soldering Iron w/ DC Cable and Leather Pouch
I have reviewed this item and have determined that is actually in fact, the TS100. Which has its own very renowned reputation. Which makes me wonder why one would change the name and as a consequence Be Not getting any of the benefits of it being directly associated with the venerable TS100. And due to this, suffering in sales, not quite being purchased as fast or as much, as it was likely assumed that it would be. Because of the nice to have accessories it comes with, I can't give this a totally bad rating. But, due to the price that is being asked of it so, I can't give it a totally good rating. Because for that price this product just isn't that good anymore. That being said, because of the TS100's price, it is absolutely every bit of that good, and more. as for this soldering iron I feel like the individual is responsible for being marketed the way it is, have just really over complicated it to where it's sales aren't as good, as I know the TS100's sales are. Just goes to show that the product being good enough to speak for itself will show that it needs no extra bells and whistles upon original purchase to entice customers to buy.
1 of 15 customers found this review helpful.
View all reviews (2)
Related Products